An interpreter is a linguistic mediator who allows people speaking different languages to communicate fluently. On top of having a perfect command of his or her working languages, it is necessary to have other qualities such as high cultural level, mental agility, a strong ability to focus and a sound insight into the underlying culture of each working language. There is different interpreting modalities, depending on the type of event that has ben planned.

These are the most frequent ones: 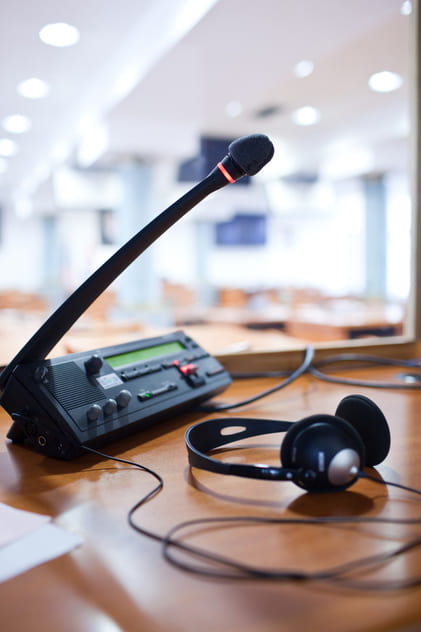 The most widely known and the smoothest of all modalities. The simultaneous interpreter translates the speech fluently into the target language while the speaker talks. Simultaneous translation requires installing booths and a sound system. If you wish, we can contact a technical services provider for you to supply, install and oversee all the necessary material.

This modality can be used in all types of events, although it is especially suited for congresses, seminars and conferences with a large audience, and for live interpreting on TV. It also possible to resort to an “Infoport” portable system, for events with a reduced number of participants.

The consecutive interpreter works by taking notes of what the speakers says, translating it afterwards. It requires prolonging the duration of the event, since there are two speeches, the original one given by the speaker and the interpreter’s translation. This modality is best suited for meetings with a limited number of participants, press conferences and other short events. It is one of the most demanding interpreting modalities as it requires mastering a specific note taking system, and to be trained for that specific ability.

This modality is used when only one person needs translation, two at most. The interpreter seats next to the user and whispers the speech to the user’s ear, simultaneously. As it is a form of simultaneous modality, it requires to work with two interpreters taking turns, after a certain amount of time.

Sworn interpreting implies a great deal of responsibility, as a sworn translator and interpreter is a certifying officer due to his legal capacity to translate and certify documents. As such, it requires a high level of specialization in legal translation. In order to work as a sworn interpreter an authorization has to be granted by the Spanish Ministry of Foreign Affairs and interpreters need to be registered in the listings issued by the above mentioned Ministry.

This type of interpreting is demanded in some courts and tribunals and other official organisms, such as the Civil Registry. Though no required for most of court hearings, it always represents an additional guarantee.